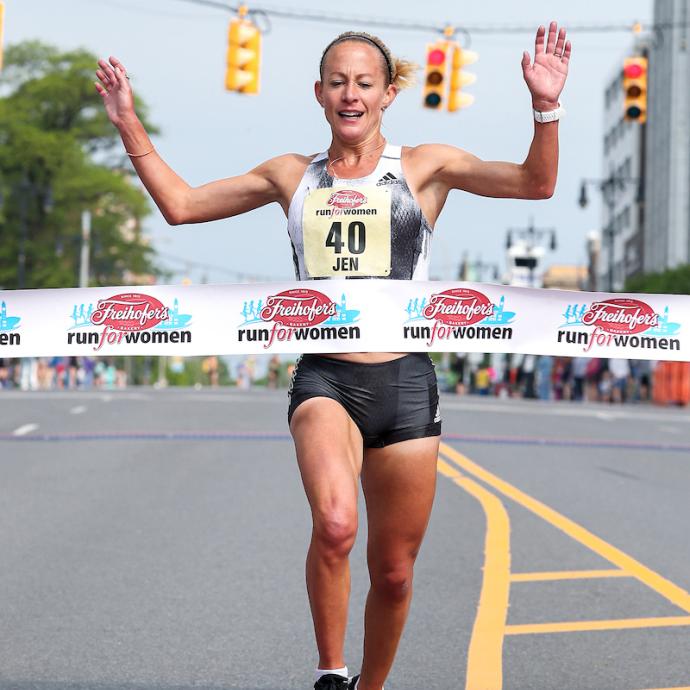 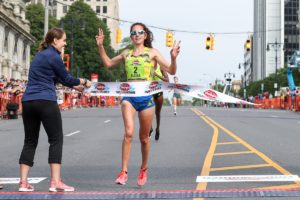 ALBANY, N.Y. (June 1, 2019) – Elaina Tabb of Watertown, Mass. grabbed the lead in the final kilometer and then held off her nearest challenger to capture the 41st Freihofer’s Run for Women 5K with a time of 16 minutes, 3 seconds.

The 27-year-old paced a field of 3,445 participants on a picturesque Saturday morning in downtown Albany, N.Y. With the victory, Tabb earned a $10,000 prize in her first time competing in the prestigious annual women’s road race.

“It was awesome,” said Tabb, of the Boston Athletic Association’s High Performance Team. “I had such a great weekend. Just seeing the city come out for this race was really fun, exciting and brought a lot of good energy.”

Tabb finished three seconds ahead of Diane Nukuri, a three-time Olympian who placed third here in 2018. Maddie Van Beek, a 27-year-old from Fargo, N.D., was third in 16:09.

Nukuri, 34, a dual citizen of the United States and Burundi who trains in Flagstaff, Ariz., and Tabb had twice traded the lead on the course that begins near West Capitol Park. 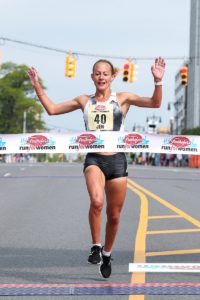 “I enjoyed trying to see if I could run off the tail end of the elite ladies, but I knew it would be a little risky,” said Rhines, who represented the U.S. in Sydney in 2000 (10,000 meters), Athens in 2004 (marathon) and Beijing in 2008 (5,000 meters) and was competing in her sixth Freihofer’s. “I really tried to stay close to them for a kilometer and stay steady, keep track of the splits and be locked in. I had a couple of young, super talented high school girls to run with out there, too.”

Among the talented teenagers was 17-year-old Kelsey Chmiel, who attends Saratoga Springs High School, just 30 minutes north of Albany. She placed fifth, finishing in 16:33, while running with an elite-athlete bib number (No. 8) for the first time.

Chmiel, who led Team USA’s junior team to the 4K title at this year’s Great Edinburgh Cross Country Challenge and will run cross country and track at North Carolina State this fall, also had run a leg of the 4x800 relay with her high school team in a state qualifier the night before.

“Today was a good day to try and go out and run hard,” noted Chmiel. “I went out fast, and in the middle of the race I just tried to keep people in sight.”

The race was tight from the moment the field took off from the Washington Avenue starting line. During the first kilometer, a mostly uphill stretch, the elite runners formed a tight pack and kept a conservative pace, finishing the first mile in 5:17. Only after they entered Washington Park, between the first- and second-mile marks, did Tabb and Nukuri begin to separate, with Tabb ahead by a few strides.

Around the two-mile post, Nukuri made a move on a downhill stretch and surged ahead. Nukuri, who recently competed in the Volkswagen Prague Marathon on May 5, held her lead as the pack exited the park. However, on the final downhill, Tabb slid into the lead. She held on and crossed the finish line to the applause of hundreds of spectators gathered adjacent to the New York State Capitol Building.

“I think my strategy was to keep it cool in that first mile because I could see that taking a lot of you later in the race,” Tabb said. “I figured stay cool first mile, start pushing second mile. That third mile was a lot harder than I thought it would be, but it was good.”

Event sponsors include Freihofer’s, Price Chopper Supermarkets and The City of Albany. Media partners include 99.5 The River and the Times Union.